I live near the Power Plant and had heard that there was a lot of trash left after the Kanye West concert on Mar 19, 2011. I decided to investigate.

I have lived across from the power plant for almost a year now, and there are regularly events there. I can say that most of them (other than parking) go by without me even noticing. While I can’t report the disaster described at Reddit (I have a feeling the businesses located there cleaned up some of the reported mess before I got there), I can report this is the worst I have ever seen the place after a show. There was definitely an above average amount of trash, bottles, and food stuffs that didn’t make it into the trash cans/dumpsters in the area.

A utility room was used as a toilet. I know that cause you could smell it a good distance away. 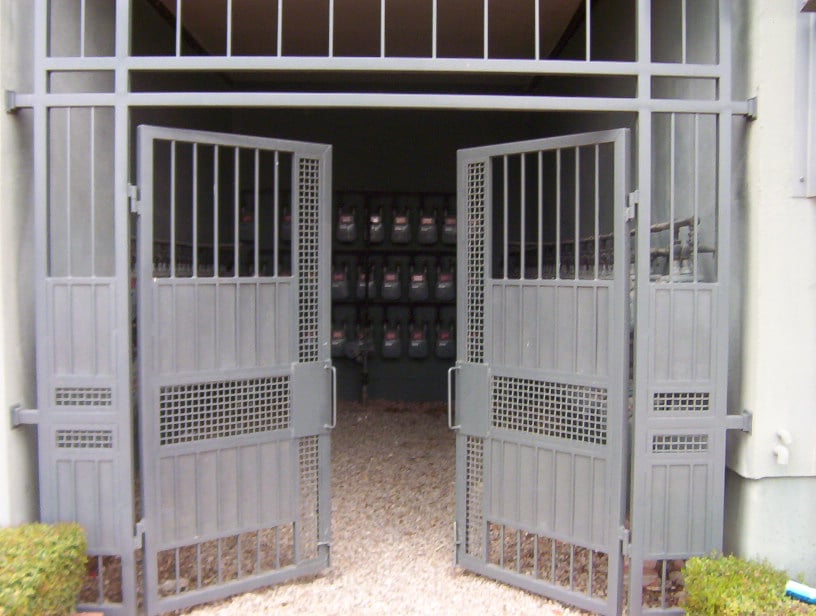 Some people were clearly trying to tear down the fence and used a security barrier as a ladder to get over it. 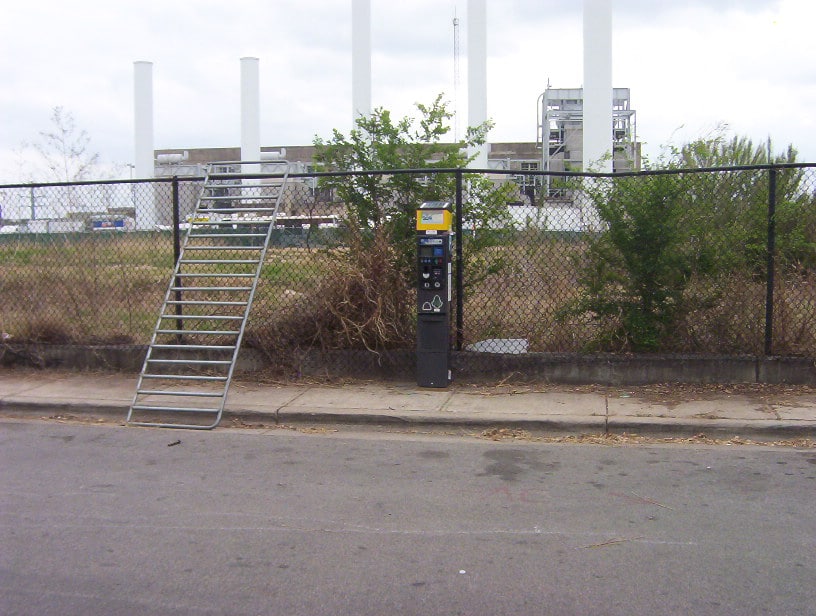 And a gentleman by the name of Gilbere Forte decided that 3rd St was his personal promotion area. He (or his promoters or his fans) put posters up on almost literally every surface along the street. Almost definitely on every street sign, many toll collection machines, and even a couple of trees. 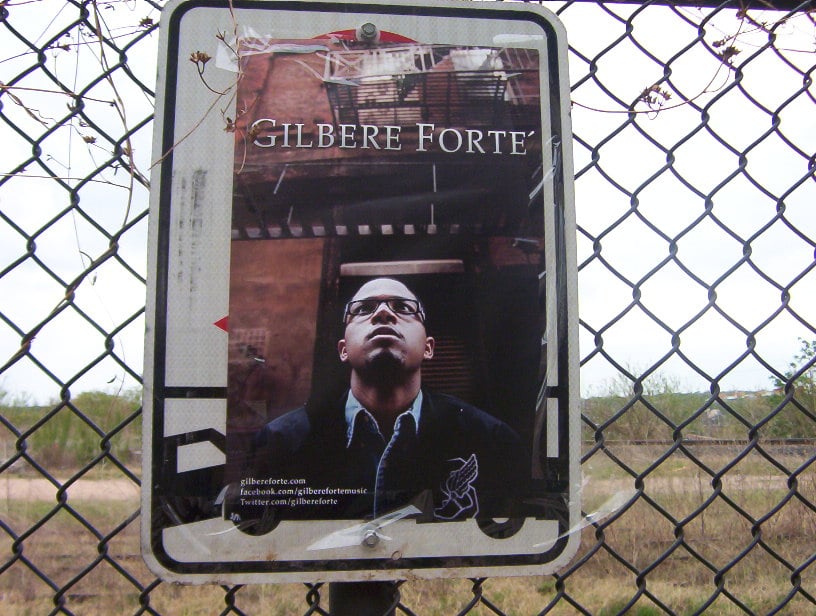 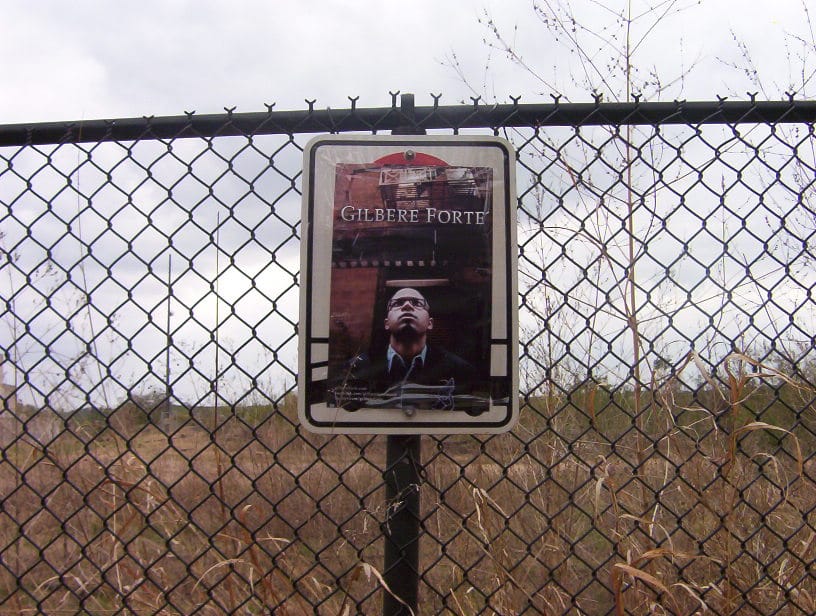 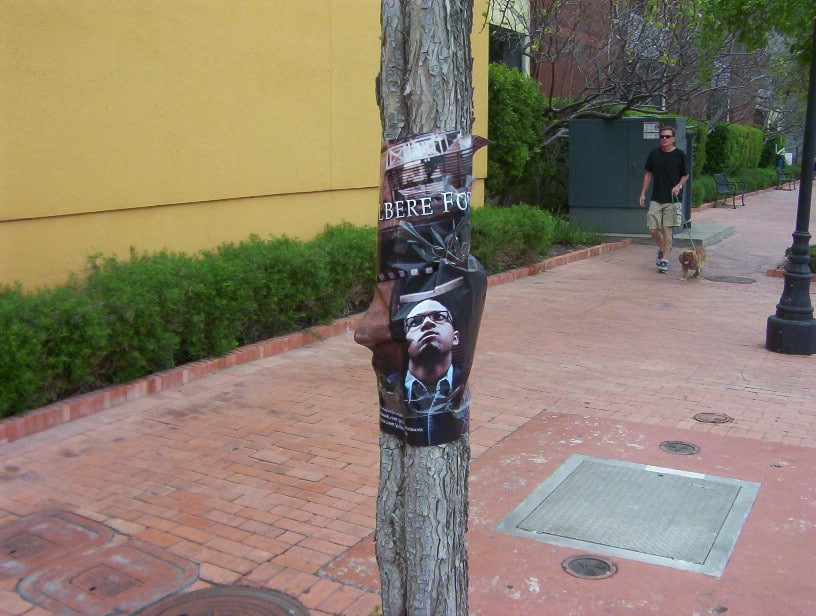 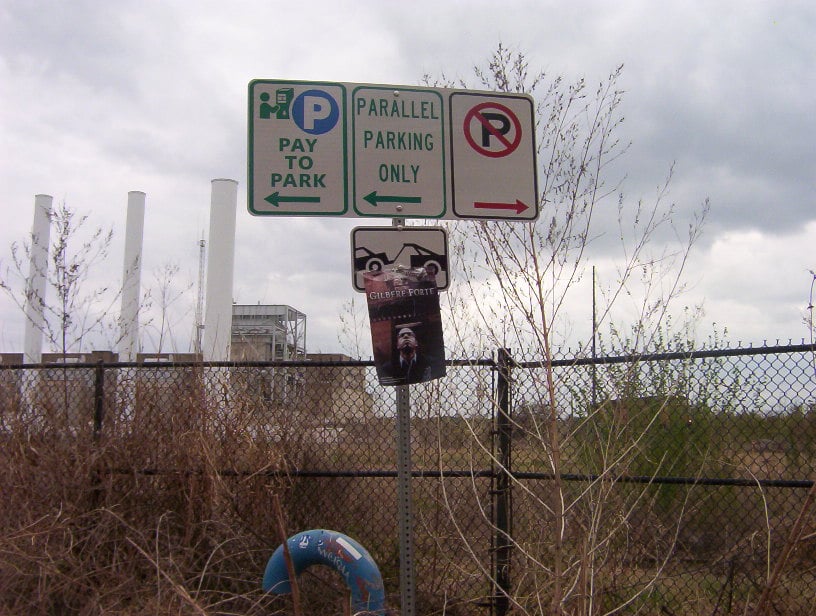 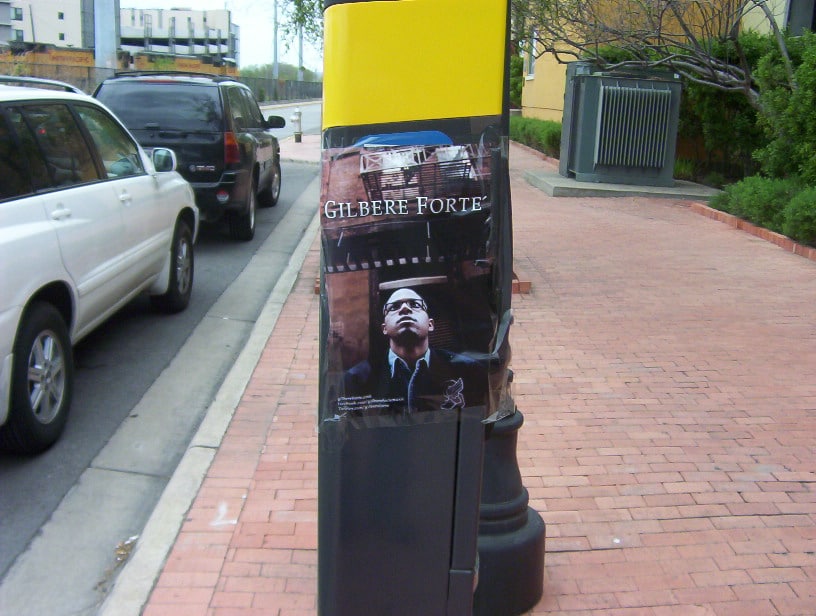 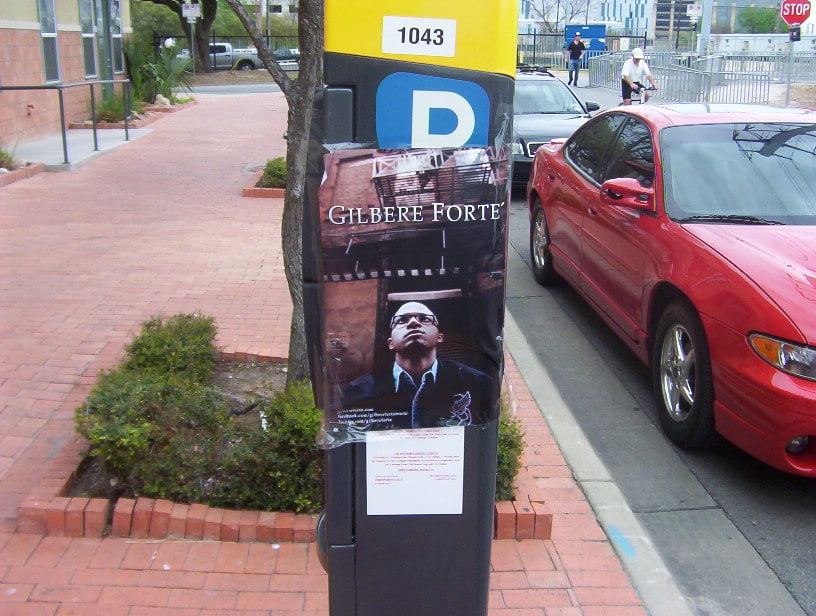 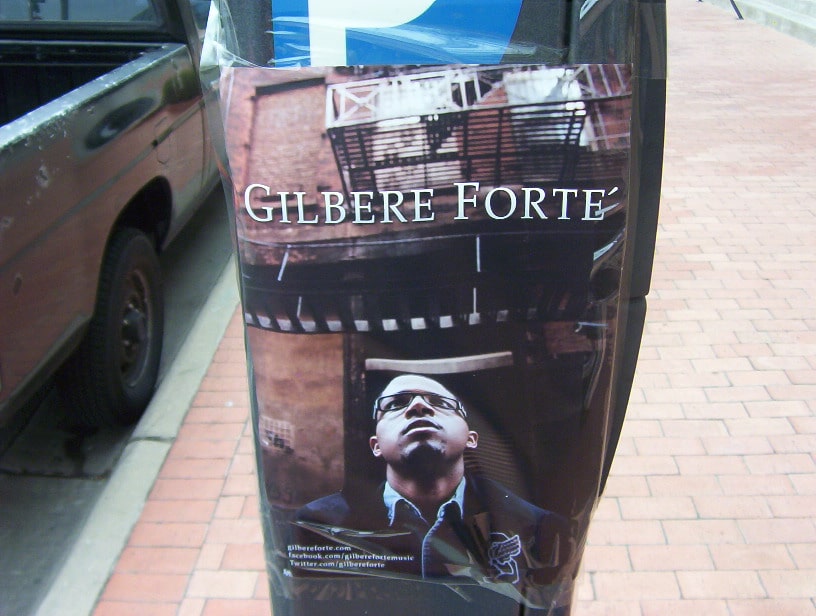 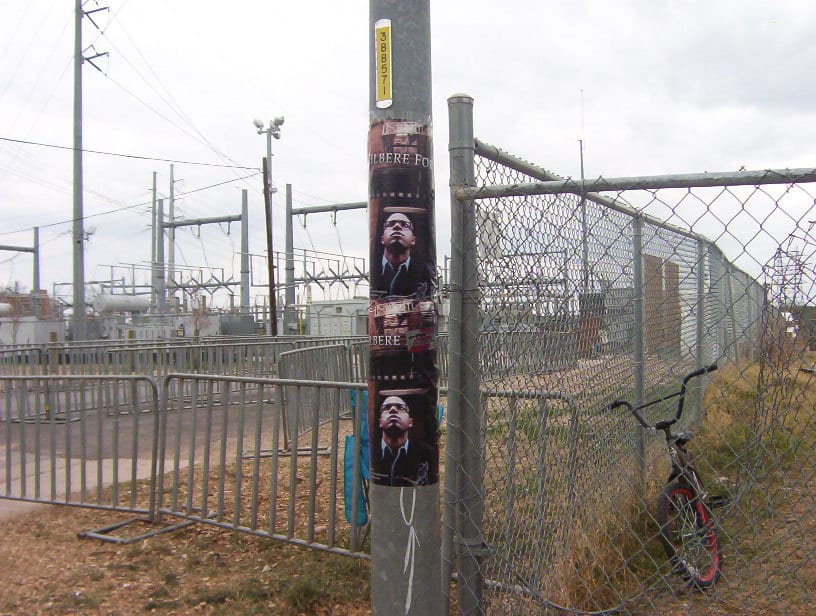 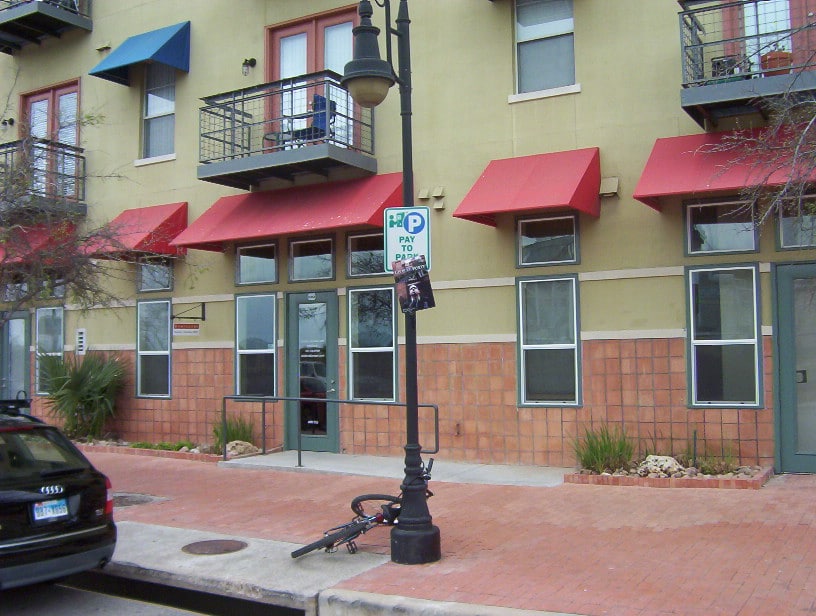 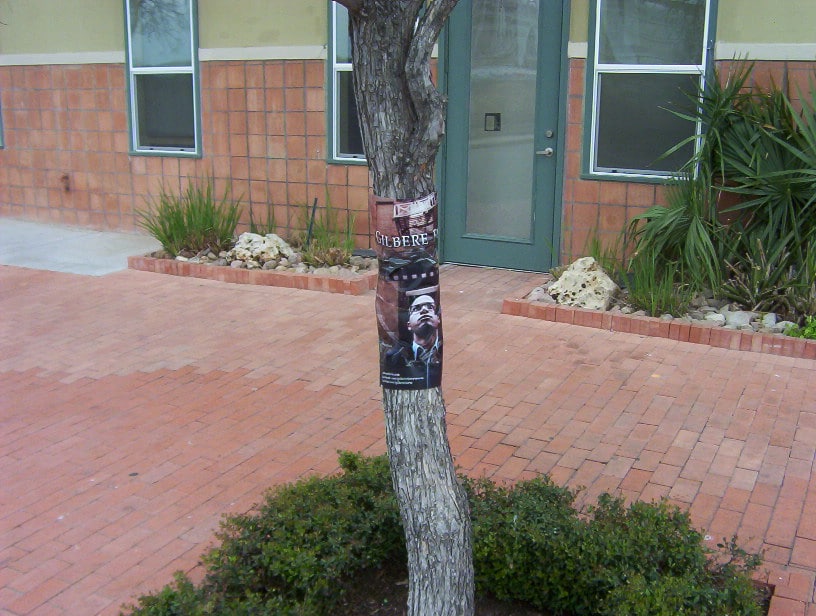 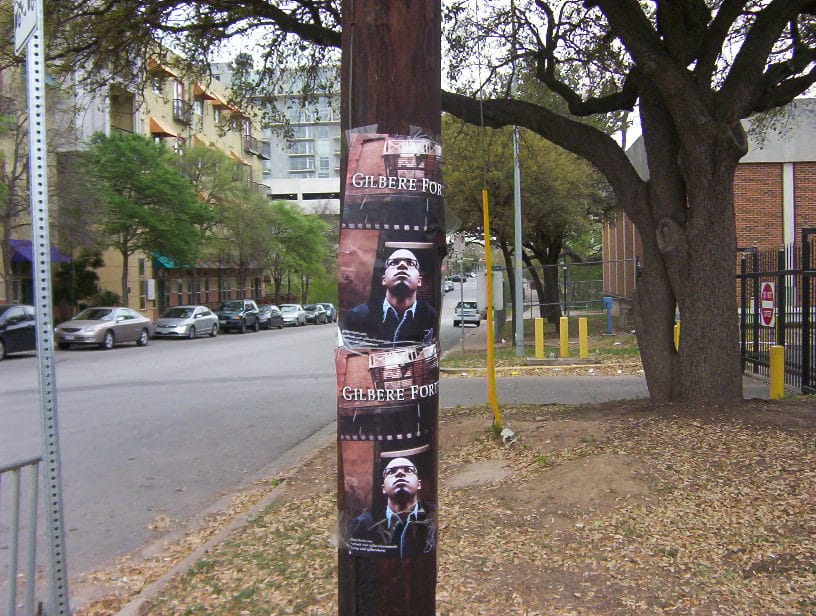 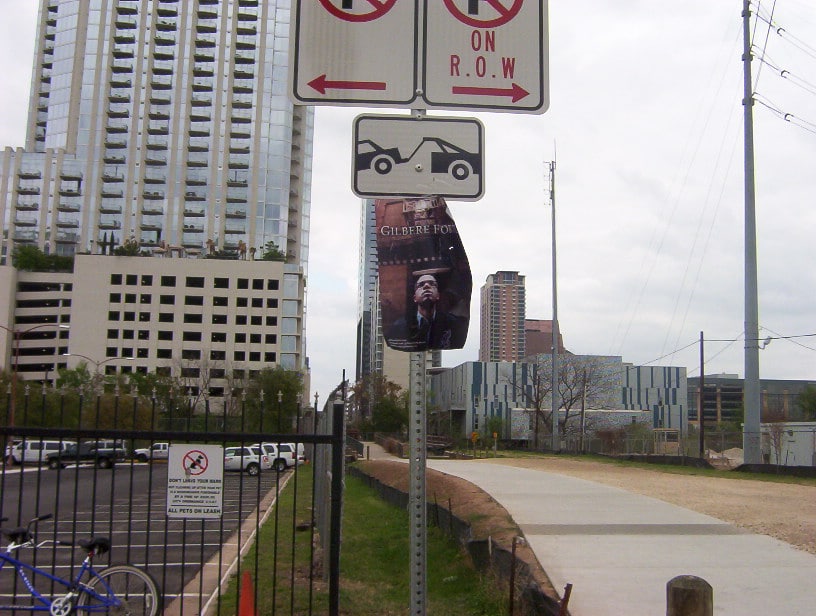 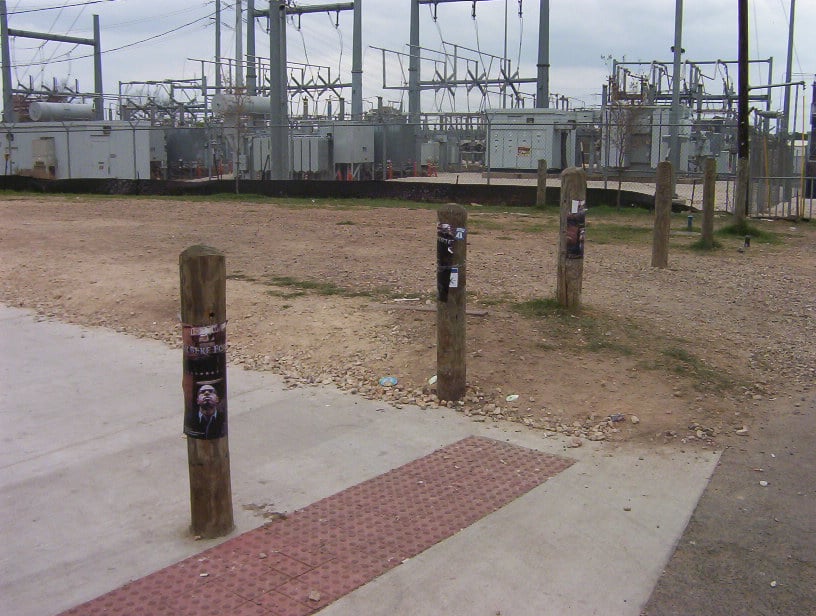 That isn’t every last one, but you get the idea. This is just one block. I took some down, but it is a little harder than it sounds since whoever did this used packing tape and usually wrapped it around the entire perimeter of whatever they were taping it to.

Maybe Mr Forte would be able to explain how they all got there and who he thinks should have to take them down? His website (appears to be down), Facebook, and Twitter.

Upon viewing these photos, Mr Forte’s fans…bragged.  They thought it was hilarious.

And finally from his manager.    I wasn’t sure if I should trust the Twitter bio he has for himself, but a quick Google search comes up with this LinkedIn profile that says the same thing.  https://twitter.com/#!/denigma/status/49880800593854464

Technically, we still don’t know who puts the flyers up everywhere….can we agree leaving them there is not the coolest way to promote a musician?

UPDATE 2: Commenters saying I am being paid to graffiti my own neighborhood and post about it are too clever by half.  I’ll let Gilbere’s manager speak to that with his most recent tweet about this

My intention was to show some of the littering that occurred.  Needed proof of what happened and linking to various ways to contact him was to make it easy for people to contact him and hopefully discourage him or overzealous fans from doing it again.  Some people did contact him/them but it doesn’t appear to have made much of an effect on anyone.

I did take down several even before I started taking pictures, but as a I mentioned….these were very securely fastened in many cases.  Thats when I got annoyed and got my camera.

Wait a second…maybe the guy who accused me of being a fan is actually a fan himself who is trying to trick me into taking this down to prove I am not fan…very sneaky commenter….very sneaky.