The Cathedral of Junk is something I’ve been wanting to talk about for a while now. But before I do that, and before I even tell you where it is, I have to tell you this. Before you can visit the Cathedral you must call ahead (512-299-7413) and make an appointment. You’ll be asked to provide a $10 donation. It’s located in a residential neighborhood and you’ll be asked not to block any of the neighbor’s driveways or mailboxes. (We’ll talk about why all of this is this way in a moment.) Assuming you’ve done all that, now I’ll tell you the address: 4422 Lareina Drive. It’s just off South 1st and St. Elmo.

Now that that is out of the way, we can take our time. I love this story because of the innocence of it. I love how it perfectly encapsulates ‘new Austin’ vs ‘old Austin’. I love that the bad guys are like the bad guys from an ’80s movie. Some snobs that are picking on a scrappy underdog for no especially good reason. It even ends with the town banding together to fight back and winning. Let’s jump in.

On the one hand, the Cathedral of Junk is exactly what it sounds like. At its peak, it was a 3 story collection of all sorts of leftover stuff, near 60 tons of stuff if estimates are correct. Bike parts, car bumpers, kitchen utensils, ladders, wires, surfboards, circuit boards, more bike parts, old beer signs, clocks, and other electric things. Hell, look at the pictures below. Even the stairs are fun at this place. The creator has since reduced the height a little (it’s actually almost invisible from the street), but it is still quite elaborate.

And that’s why, on the other hand, the Cathedral is so much more than it sounds like. Describing it can be reductive, but when you start walking through it, the Cathedral seems to grow. While not as tall as it was, it still has multiple levels to climb and slide down. It’s not nearly as random as it looks at a first glance. You start to see patterns where items that have a similar texture or color are grouped together. The sun will shine through different parts and the wind chimes add a nice touch to the feeling that this is something special. It even includes a Throne Room, where the owner frequently sits and answers tourist’s questions. 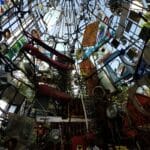 Looking up from the entrance

Where did this come from?

Which is the perfect segue way to start talking about the owner/builder/creator, Vince Hannemann. He’s a really laid back guy that lets strangers wander around his yard and climb through this thing he’s been building since the late ’80s. Him and his dogs, Smoky and Lucas, been doing this since full time since 2008 when the Cathedral was in a Bank of America commercial gave him residuals to quit his day job. (and if anyone can find that commercial, please let me know) Vince loves answering questions until you tell him you’re doing an article for the internet. Then he tells you how frustrated he’s become with incorrect information about him and the Cathedral that are already out there. Which is fair. He generally isn’t the kind of guy you’d expect to have tattoos across his knuckles (yes, they spell out “JUNK KING”).

He’s not the kind of guy who has illusions about what he has done either. While many articles about the Cathedral will call it a “monument to consumerism” or a “commentary on waste and consumer culture”, that’s not what Vince thinks about it. He specifically rejects that it has any “profound meaning.” He describes it as a “clubhouse.” While the local art community calls him a “yardist”, he’s far more in tune with the kid community, “when they come through, they know what it is.”

The fun police show up 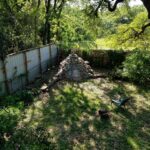 View from the top

Either way, it’s safe to say many people love the Cathedral for many reasons, but anything that has been around 30 years has had some rough

patches and the Cathedral is no different. The first one came at the 10-year mark from Vince himself. The attention had gotten to him and he wanted to be done with the whole thing. “I wanted to regain control over it,” he admitted. He went so far as to actually tear down the 3 story tower that used to exist. Thankfully for all of us, he changed his mind. Sort of. While the tower never went back up, he did use the junk from it to rebuild 3 more rooms closer to the ground. “I decided to go less World Trade Center and more Frank Lloyd Wright.”

The real near-death experience for the tower came 10 years after that. It was when I, and a lot of the rest of the world, learned about the Cathedral. See, the Cathedral isn’t really visible from the street, but many of Vince’s neighbors can see it. And they don’t care for it at all. And they were not afraid to go tell mommy (the city code compliance office).

This is where the story goes from quirky piece of Americana to an honest to gosh underdog story. Keep in mind that the Cathedral had been around for 20 years at this point. Vince consulted with experts to ensure it was as safe as he thought it was. A whole bunch of volunteers, including me, worked on the site and donated to help him get the required permits. 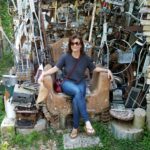 The city sent multiple inspectors and engineers over multiple years. They were all looking for something that violated code. One went so far as to climb on it with loads of water on his back to find weak points. And they all found absolutely nothing. It really shouldn’t have been that surprising a finding. It has lasted 20 years in Texas storms. The complaints weren’t actually about safety in the first place so it is little wonder that there wasn’t really a safety issue.

This whole episode is part of why donations and making an appointment are so critical. If he had regular hours and prices he would be considered an “official business” and be host to even more arbitrary rules. Again, call before you go.

The future of the Cathedral

Ok. This could be a little creepy

So where does that leave us? The Cathedral is still a great place to visit. It’s the rare attraction that can keep kids entertained for a while but not bore the parents. And it can still be more than just a quick tour. People can and do rent it out for parties (birthday, bachelor, CD release, etc) and live theater performances. There have even been weddings there. Multiple weddings and engagements in fact.

Is the Cathedral done being built? As recently as this weekend, he was showing visitors the new pieces he was planning to add. I have read in other places that Vince thinks about tearing the whole thing down sometimes, and maybe that is true. But I can confidently report that as of April 2019 the Cathedral of Junk, and Vince, are still going strong.

everythingaustinapartments.com is your 24 hour apartment locating service with access to more listings than any other online service.