The Most Complete Guide to Watching the Bats in Austin 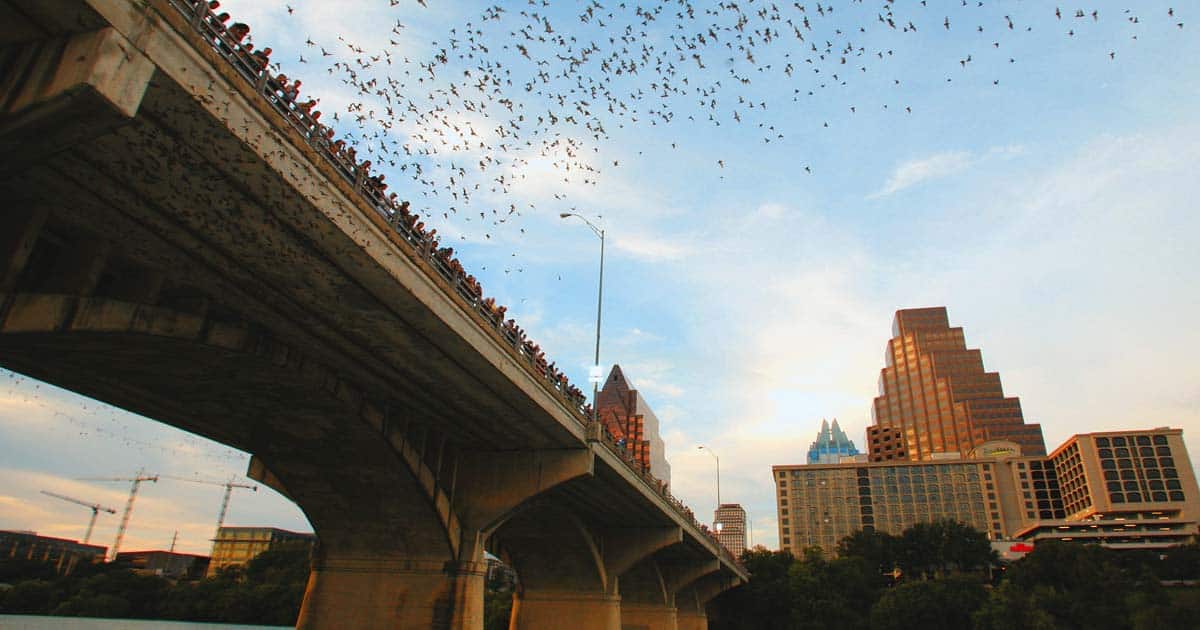 You could be wondering why you’ve been told to look at a bunch of bats. Why would 100,000 tourists come to Austin every year to see them?

It’s because there is a whole lot of them and it’s pretty impressive seeing them all take off at once. I know it might sound weird, but trust me on this.

The gaps underneath the Congress Avenue Bridge are a near perfect place for the Mexican free-tailed bats to migrate for the summer and have their babies (almost all the bats under the bridge are female).

So how many are there? According to Bat Conservation International, between 750,000 and 1.5 million bats live under the bridge during the summer. (They eat 10-20 thousand pounds of insects every night)

For context, Austin’s human population is a little over 900,000. So there are times when there are more bats than humans in town!

When can I see them?

The bats are generally in town from March till November. The baby bats are capable of flight around mid-August so the nightly flight can be even more impressive around that time.

They generally start coming out around 20 minutes before sundown (between 8 and 9 o’clock). You can find weekly updates on what time the bats are expecting to come out here.

How do I see them?

There are 4 main ways to watch the bats.

The most convenient spot for most of these options is the paid lot of the Austin American Statesmen building (305 South Congress Avenue). If you don’t mind walking, there is a free lot about 1/4 mile west near the South 1st Street bridge. You can only park here for two hours, but that should be enough for bat viewing if you arrive just before sundown. There are also a number of hotels and businesses that have paid options nearby. I personally recommend taking a ride share to the area so you don’t have to worry about parking at all.

It should go without saying that the bats are wild animals so if you find any lying on the ground, you should not touch them at all.  Don’t shine lights on the bats. It will cause them to be temporarily blinded. Finally, it might not be a bad idea to bring some bug spray. The bats eat bugs but the bugs may eat you in the meantime.

I think that about does it. Feel free to leave any other questions in the comments.

Kelly Stocker – the one woman guide to Austin

The Most Complete Guide to Austin’s Greenbelt Access Points

Richard Fusco can get you a job. He also build schools and hospitals. You should meet him.

We spend a lot of time here trying to keep everyone entertained with all the things to do and...